After a whirlwind conference weekend (more on that later), we awoke to find something amiss. The girls went outside to play this morning and noticed that the largest pumpkin, which was set right next to the window on the porch had been stolen. The girls have watched too much reality crime TV because they examined the crime scene before I got there and determined it was too large to be carried away by an animal. Smaller pumpkins have little gnaw marks on them but Maeve and Hilde figured if an animal ate the big pumpkin it would have needed to chew into and then would have left a mess. I am surprised they didn't rope off the area so that it didn't get contaminated. 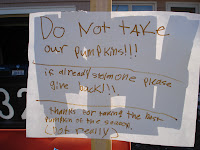 So, incredulity lead to indignation and Maeve created a sign to post in the yard. (Maeve often communicates to the world in signs, especially when she is indignant. Signs on her bedroom door, signs in the school room and now signs on the mailbox.).

I am not sure what think about the stolen pumpkin. Most of our neighbors have lived on this street longer than I have been alive and I can't really fathom Mr. K sneaking down the road in his Mercedes to steal a pumpkin or Mr. Arch taking the pumpkin to his part time security job at the local outlet mall. Miss Jane may have taken it as a model while she decorates cakes at Shaw's but if this was the case it would be home by now. We also did not find any evidence of smashed pumpkins. Which if a teenager had stolen it, I would assume it would be to smash it on the road. I hear that's a good Halloween pastime.

When Grandpa gets here on Wednesday we will ask him to dust for prints but for now we are living with the great pumpkin caper. If you have seen a tallish, oval shaped pumpkin of medium size, Maeve really wants her pumpkin back.
Posted by Jill Perrin at 4:28 PM