Quotes of the Day

I have two quotes rattling around in my head this morning. They come from very different places. The first is a quote from comedian Ross Matthews on Chelsea Lately. This is a very funny, late night show on E! I know what you are thinking, E!? Yes, well everyone has their guilty pleasures and mine is clever, acerbic humor late at night. I find myself switching from Chelsea Lately to the Daily Show and back again. Anyway, the cast of Chelsea was discussing the show The Jersey Shore. I can't take time to tell you all about it but suffice it to say dumb "Guidos" make for a train wreck of show that Americans can't stop watching. They are negotiating for higher salaries and Brad Ross says, "Good for them, because you can't put a price on that kind of stupid." Love it. Can't put a price on that kind of stupid. This is a keeper I see myself using often.

This is a priceless reminder that today is a new day and it can be anything we want it be. The past only has power over us if we let it. We get to choose to make all things new.

I think both sayings play out a lot in my life. I guess I just hope the second one wins out more often. I also hope the cast of the Jersey Shore reads Real Simple.
Posted by Jill Perrin at 8:21 AM No comments: 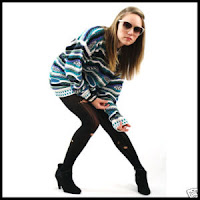 Today I was reminded twice that I am getting old. Not just once but twice. I am ambivalent as to whether I care if I am old, I just don't like to be reminded.
First, I received a clothing catalog in the mail. I don't know why I get this catalog, I don't think I have ordered anything from them since before Maeve was born. Anyway, I flipped through the pages and saw zip leg leggings, acid wash jeans (which are called ultra-hued, but I know acid wash when I see it) and, wait for it, NEON. Yes, neon. A neon sweater with dolman sleeves. I felt like I was in a time warp- could it be 1985 again? Then I realized that what was fashionable when I was 14 is now back in style. Good heavens, neon was a bad idea to begin with, for the love of God don't bring it back! No one looks good in neon pink or lime green. Seriously, no one needs that bright of a color.

Then after dinner the girls and I were watching Cake Boss (TLC). If you haven't seen it, you should; it is like watching the Jersey Shore with baked goods. Okay, better than that, but still a slice of life from the Italian section of Hoboken. Anyway, they did a cake for the 40th anniversary of Sesame Street. The girls wanted to know where Abby cadaby was. I wanted to see Snuffleupagus. I said, "Who is Abby?" Hilde said, "Who is Snuffleupagus again?" Really? How have my children missed out on the vital pieces of children's television. I took the chance to inform them that back in the day there was no Elmo, no Zoe and no Abby. They were incredulous. Does anyone else remember the school house scenes and spelling with Franklin? I wonder if I could find old Sesame Street episodes on video. I think I could even get Daniel to watch them. I blame Dora the Explorer for this. If she hadn't come along and pulled kids to that other network, we would all still be getting all our kids' TV from PBS.