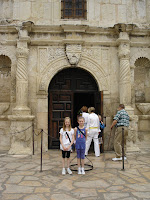 Everyone knows the big deal in San Antonio is the Alamo. I will admit it is very cool. Right smack dab in the middle of downtown is this little brick mission with a big history. The Alamo has come to symbolize the Texan spirit and fight. Even though it isn't very big it is awe-inspiring in a reverential way. People really did die here for something they believed in - an Independent Texas. Imagine if they had won. 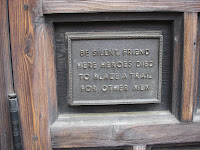 These signs are for my dad. Clifton and I both reminisced about how my dad would make everyone read every sign. Really, every sign and marker and all the way through. You might even have to stand and have your picture taken in front of one. 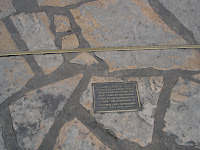 Very cool sign. It is a more dramtice shortened version of this "Unsheathing his sword during a lull in the virtually incessant bombardment Colonel William Barret Travis drew a line on the ground before his battle-weary men. In a voice trembling with emotion he described the hopelessness of their plight and said, “those prepared to give their lives in freedom’s cause, come over to me.”
Without hesitation, every man, save one, crossed the line, Colonel James Bowie, stricken with pneumonia, asked that his cot be carried over.

We crossed it too. 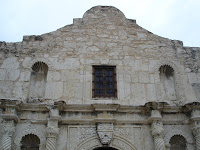 Looking up at the top.


We couldn't take any pictures inside. This was disappointing because the best part was inside. There were all different rooms with artifacts.
One room was where the women and children were kept safe. They all survived. We three girls appreciated that room.

Then in the main hall they have flags for each state or country that sent men. Each flag had a banner for how many men were.


Of course every tour of the Alamo ends with a picture with a ranger. 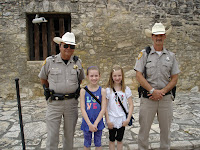 The funniest part of our tour took place in the courtyard. Around the church is a beautiful courtyard and then the outside wall. We were touring the courtyard and I said to Clifton and the girls, "Oh this courtyard is beautiful, wouldn't this make a nice place to get married?" to which Clifton replied, "Uh, Aunt Jill maybe getting married at the Alamo isn't the best way to start a marriage." He has a point. As brave as they were, they were doomed from the start.
Posted by Jill Perrin at 9:53 PM