As summer rolls on, our schedule consists of bursts of outside activities (gymnastics, dance, violin) and then stretches inside the house hiding from the heat. It has been 100 degrees or more consistently for over a month. Yuck. It's kind of like how we lived in New England in February except with excessive perspiration.
Luckily, I have resourceful girls. While in hibernation they have been reading. Yes, actually books in their hands. This afternoon for hours it was silent as both girls were lost in their books. It was so silent, I wanted to take a picture. I didn't for fear it would break the lovely silence. Instead I joined them and we all read for a long time. Ahh.
They are also growing things. 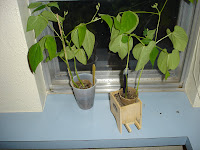 These are the bean spouts from VBS a month ago still going strong.
They also make things. Maeve has made earrings and Hilde made a bobble head doll out of Sculpey. I have pictures of neither because they were both gifts. 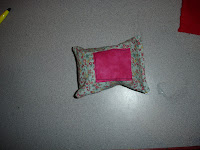 Today, Hilde sewed this:
This is the tooth fairy pillow she was inspired to make.
She used the sewing machine this time (we finally un-boxed it), usually she sews by hand.
They also have screen time. They use the computer to play a very intricate horse game, where they breed and train horses. I often hear, "My foal was born today, I need a name." and other horse-people language that I don't understand because, well, I don't speak horse-people language. (What's the difference between a bay and chestnut again? They're both brown, right?)
I realized tonight after they had gone to bed what a unique thing it is to have two girls who can occupy themselves, get along and create things. Most parents are going bonkers, counting the days until school is back in session.
Me, I am wandering around my house amazed and very grateful.
Posted by Jill Perrin at 9:57 PM

Email ThisBlogThis!Share to TwitterShare to FacebookShare to Pinterest
Labels: http://2.bp.blogshttp://3.bp.blogspot.com/-CFI0SbPlW7o/ThUis6QIdJI/AAAAAAAAATM/0W7lpzULY7c/s1600/Hildepillow.JPGpot.com/-USmKJMcq_Fk/ThUiYz7fmeI/AAAAAAAAATE/GfCain_f3nA/s1600/hildeenvelope.JPG